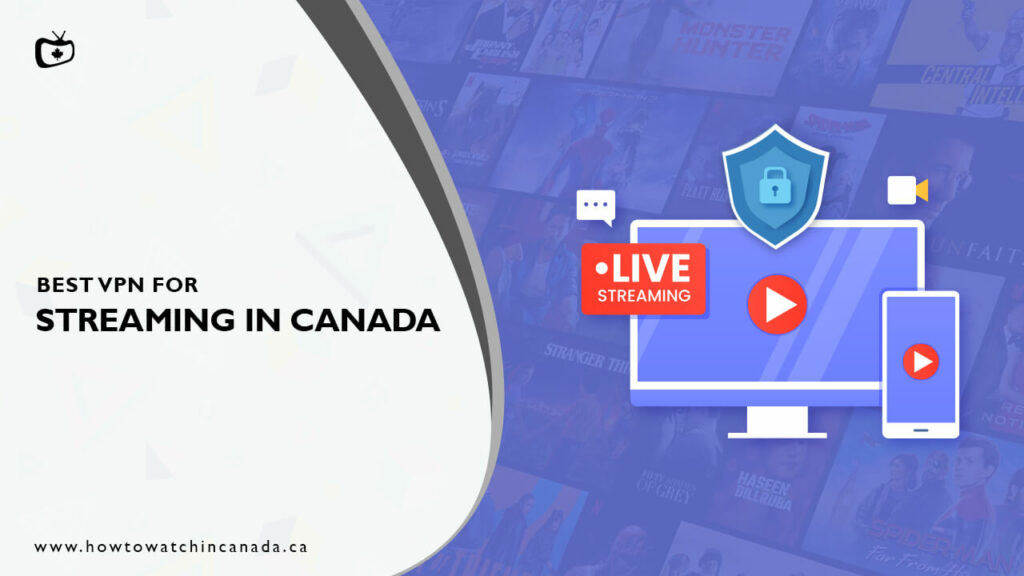 Which VPN is best for streaming? To answer this question, HowToWatchInCanada comes in. We’ve tested and evaluated the best VPNs for streaming; among these VPNs, we recommend ExpressVPN to get the best possible experience when streaming your favourite shows and movies.

VPNs are becoming more and more popular as people seek to protect their privacy and keep their data safe. It can be tricky to identify the correct VPN for you with all of the options available.

We’ve looked at a variety of factors, including price, speed, security features, and customer service. So whether you’re looking for a VPN to unblock Netflix or just want to keep your browsing data safe, we have the perfect solution for you.

Below are the factors that need to be checked to call some VPNs great VPNs for streaming.

What makes a great streaming VPN?

VPNs, like most things in life, are best suited for specific purposes. As a result, not every VPN will perform equally well when it comes to streaming. As a result, we’ve compiled a list of factors that make a VPN best for streaming:

We put every effort into testing and reviewing over 50 VPNs for streaming purposes. We checked each provider on various devices with almost 30 international streaming services to find the top 5 best options of VPNs for next year, 2022.

Here’s a detailed breakdown of our top picks.

ExpressVPN is the best VPN for streaming, according to our tests, because it unblocks almost all on-demand and popular streaming services worldwide. Its outstanding unblocking ability, speed, security, and server coverage are just a few of its highlights.

Platforms such as Netflix constantly try to prevent VPNs from unblocking their services, but ExpressVPN is always one step ahead, keeping its servers up to date with the most recent unblocking mechanisms. Unlike many other providers, ExpressVPN unblocks BBC iPlayer, American Netflix, and Sky Sports, which actively block VPNs.

ExpressVPN provides access to over 3000 servers in 94 countries, allowing you to watch any streaming service from anywhere. So, whether you’re trying to watch shows, movies, or live sports, ExpressVPN’s fast servers are up to the task. 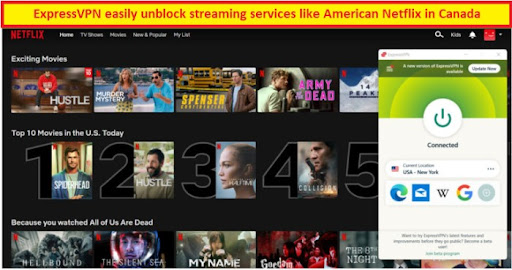 ExpressVPN consistently delivered fast speeds in our tests, regardless of server location. ExpressVPN provided a blistering download speed of 89.42 Mbps and an upload speed of 84.64 Mbps over a 100 Mbps connection.

We put ExpressVPN apps through their paces on Windows, Mac, iOS, Android and Linux clients. We were in love with the mobile apps due to the Quick Connect feature as well all of its other smart elements which made it extremely user-friendly.

Due to its advanced technology, ExpressVPN can also unblocks other popular streaming sites like BBC iPlayer in Canada, Hulu Canada and Discovery Plus Canada.

While streaming is the priority, ExpressVPN’s security is excellent, as it employs military-grade encryption and a variety of fast protocols. It ensures your online anonymity, allowing you to stream in peace without interference from third parties, including your ISP.

If you run into any problems while streaming, there is excellent 24/7 live chat customer support available.

A VPN for streaming that is inexpensive and provides excellent unblocking is called Surfshark. The most affordable VPN on our list is Surfshark, which you can purchase for CA$ 3.35/mo (US$ 2.49/mo) (US$2.22)/month (83% Off on 2 Years Plan).

Another ace up its deck is that you can cover an unlimited number of simultaneous connections with just one subscription. You can stream content using a single Surfshark account on your Roku, laptops, Smart TVs, smartphones, gaming consoles, and other gadgets.

When we connected to Surfshark on 12 devices at once to verify this for ourselves, there was no difference in performance, and we could stream without any problems.

You may unlock a variety of platforms with Surfshark’s 3200+ servers servers located in 65+ countries nations. Surfshark is recognised as one of the best VPN for unblocking popular streaming services like W Network outside Canada, ESPN+ Canada, and Crackle in Canada. 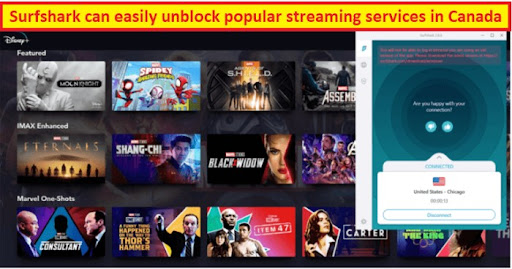 Surfshark offers an outstanding balance of price and speed. Surfshark reported a quick download speed of 88.14 Mbps and an upload speed of 83.72 Mbps on a 100 Mbps connection.

We were still above the threshold where we could comfortably watch in 4K without experiencing any buffering or lag.

You should try Surfshark if you’re looking for the best VPNs for streaming because of its attractive price and 30-day money-back guarantee.

NordVPN’s extensive server network allows for simple unblocking. It has over 5310+ servers servers in 59+ countries countries, ensuring fast speeds regardless of which server you connect to.

NordVPN’s SmartPlay technology demonstrates its focus on streaming. To avoid geo-restrictions on streaming services, SmartPlay automatically reroutes your traffic through an appropriate server. It is enabled by default in all NordVPN apps and ensures you can access any content you want.

In a nutshell, NordVPN supports a wide range of streaming services, including YouTube TV in Canada and Pluto TV In Canada. It’s also a good option if you want to access Netflix’s regional catalogs, such as those in the United States, the United Kingdom, and Australia, among others. NordVPN is also compatible with Japanese Netflix. 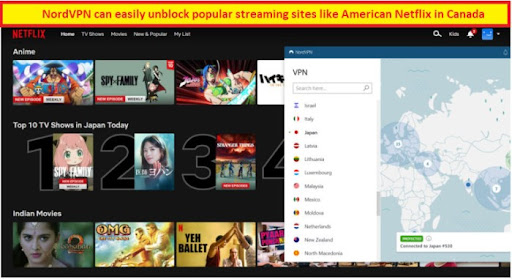 NordVPN consistently provided us with speeds that were above average during our performance testing. Our speed was excellent for Ultra HD streaming, even on distant servers. We measured an 86.39 Mbps download speed and 82.86Mbps uploading speed over a 100 Mbps connection.

NordVPN has an advantage for streaming thanks to its big server network, fast servers, and SmartPlay feature.

NordVPN is available for CA$6.89/mo (US$4.99/mo) (Save 60% on a 2-year subscription) and has apps for all popular devices. If you join up and decide you don’t want to continue, you will receive a full refund within 30 days, thanks to the 30-day money-back guarantee.

Why Do You Need a VPN for Streaming?

A high-quality VPN (ExpressVPN) is essential for streaming since it allows you to access geo-restricted content through services such as Disney+ Hotstar in Canada or Voot Canada. Second, a VPN helps resolve bandwidth throttling-related buffering problems.

In summary, a VPN can significantly enhance your viewing experience. Thousands of shows and movies unavailable in your country can be accessed with a VPN. For instance, Thailand’s Netflix only contains 4864 titles, while the US Netflix has over 5879 titles.

In addition, some services, like NBC, Peacock TV, Showtime, and ESPN+, are exclusively accessible in the US. Due to geo-restrictions, you cannot access them from countries other than the USA.

When you use a VPN, it hides your actual IP address, so you may mislead the streaming provider into thinking you are in one of the supported nations. You can use this to access all of the stuff that isn’t available in your area.

How to Access Different Streaming Services Using a VPN?

You must configure a VPN to access international streaming services or content. You can quickly get around geo-restrictions and view anything you want with the help of a VPN.

Once you’ve decided on a VPN, follow these instructions to utilize it from any location to access various streaming services:

Remember that you must first sign up for the streaming service in order to access Netflix, HBO Max, Hulu, or other comparable sites.

While a VPN can assist you in unblocking various streaming services, you must subscribe to the service in order to view its content.

Which Streaming Services Can I Use With a VPN?

When it comes to the most popular streaming services nowadays, there are several options. The majority of services, however, are only available in a few nations. However, you can easily get around these geo-restrictions and view your preferred TV episodes and movies online with the aid of a VPN.

Along with the outcomes of our streaming tests, here are the details of the best VPNs for each major streaming service:

Anyone outside of the UK has a famously tough time accessing BBC iPlayer.

The BBC’s video service is getting better and better at spotting and banning foreign VPN connections.

The best VPN at the moment for BBC iPlayer is NordVPN. It unblocks BBC iPlayer in Canada on all of its UK servers and is really quick.

Disney+ subscribers can watch films from Marvel, Pixar, Disney, and other studios when using a VPN.
I was really excited to hear about Disney+ and all the content that would be available on it. I was even more excited when I found out that I could use a VPN to watch it in Canada.

If you’re in Canada, you can also watch US Disney+ by using a VPN. The best VPN for Disney+ in Canada is ExpressVPN. It has high speeds and servers in many countries, including the US.

Users outside of the US can also access the Disney+ bundle, which includes ESPN and Hulu (with an additional fee).
You must have a payment method set up in one of the nations where Disney+ has been made available. Follow the solutions in our Disney+ VPN tutorial if you don’t have this.

Another challenging streaming service to unblock is Hulu. Anyone from outside the US must completely prohibit access to all of Hulu’s movies and TV episodes.

We put several randomized US servers from each of our top-rated streaming VPNs to the test in order to find the one that works best with Hulu.

In our research, NordVPN emerged as the top VPN for Hulu in Canada and in other regions. Once we were connected, it provided us access to HD versions of shows like The Simpsons, Fargo, and The Handmaid’s Tale.

What is the best streaming VPN?

During our tests, ExpressVPN proved to be the best VPN for streaming TV because it is compatible with all widely used streaming services worldwide and has fast servers to support Ultra HD viewing.

How does a streaming VPN work?

A streaming VPN scrambles your location so that it seems like you’re accessing the service from America, Canada, England, or any other place where a server is available. It also allows you to bypass blackouts on live sporting events.

What are the best TV streaming services?

What can I use a streaming VPN for?

A streaming VPN can be used for a variety of reasons, the most popular of which is to bypass geo-restrictions on streaming services. This means that you can watch your favorite TV shows and movies from anywhere in the world.

The second thing a streaming VPN can do is improve your privacy. A VPN encrypts all of your traffic so that your internet service provider (ISP) and other third-party trackers can’t see what you’re doing online. This prevents them from selling your data or using it to serve you targeted ads.

Whether you enjoy sports or entertainment, the best VPN for streaming will allow you to view everything you want online. You naturally want to watch everything when there are so many streaming services accessible.

Regardless of where you are, a VPN may help you get around geo-restrictions so you can unblock and stream content from different platforms and local libraries. Not every VPN can handle the job, though.

ExpressVPN is the finest VPN for unblocking streaming services in our experience, enabling us to view content across numerous platforms without any hiccups.