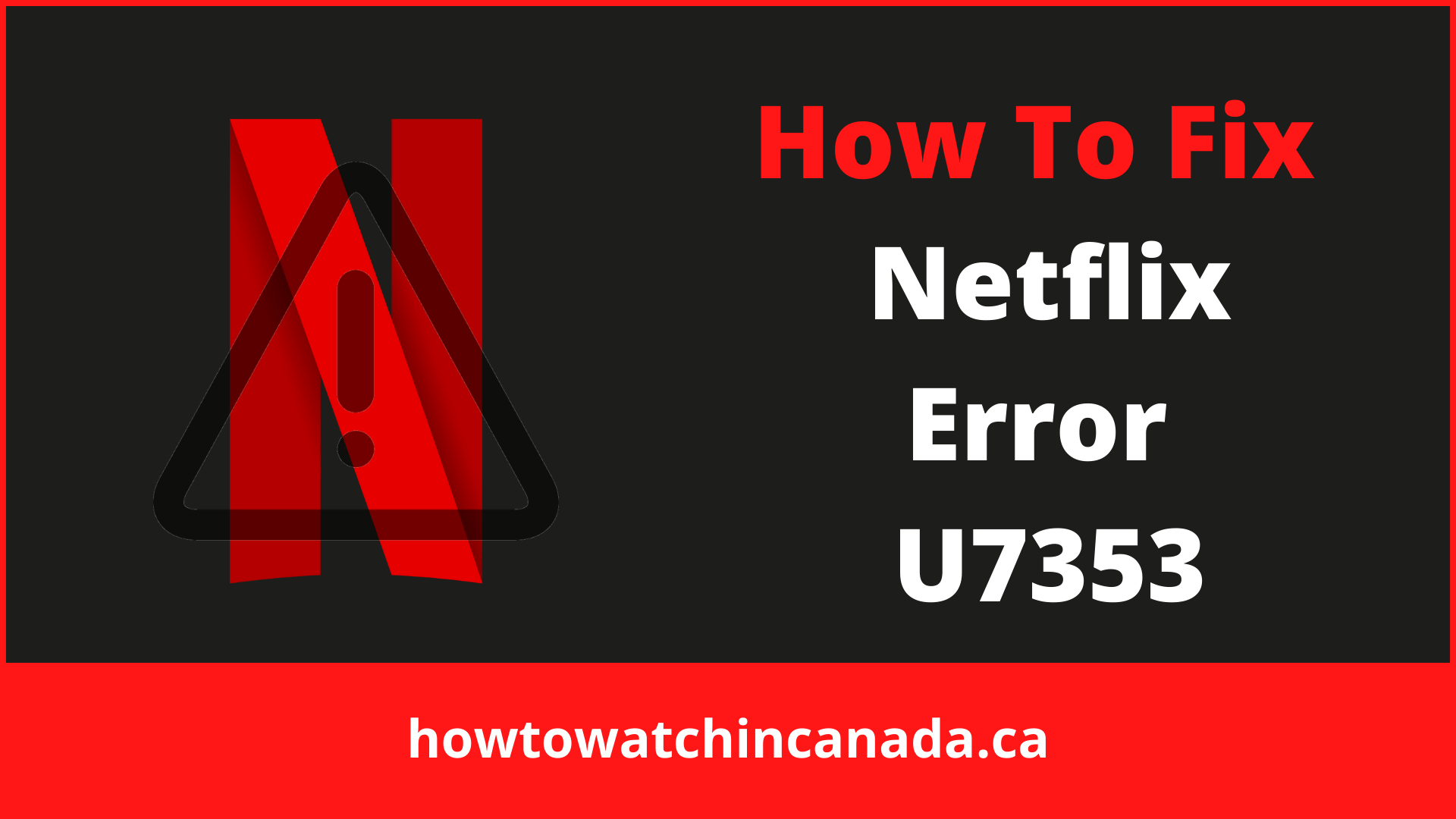 Netflix, HBO Max, and other streaming services are constantly improving their apps to make sure that they are crash-free. However, no app is perfect, and sometimes they do crash. When this happens, it can be very frustrating for the users of the app.

Netflix Error Code U7353 is another Netflix error like the Netflix proxy error that can be caused by many different things.  Netflix error code U7353 generally means there is some incorrect or missing information on the computer which needs to be updated in order for Netflix to validate your account.

There are various reasons why this error could occur, but one of the most common causes is when Netflix crashes and doesn’t close properly. And sometimes, you can’t find your favorite shows and movies on Netflix, nor is this the problem. you can easily change Netflix region in Canada with the help of the Best VPN for Netflix in Canada.

This article will show you how to fix that issue as well as other possible causes of Netflix error code U7353 if it’s not just because of crashing.

Some users are reporting that the Netflix app is monopolizing their devices, preventing other applications from loading simultaneously.

This issue is exacerbated by a Netflix UWP application bug that affects only the software. Users who have previously downloaded material for offline viewing are known to be prone to this issue.

Fortunately, Netflix developed a hotfix for this problem through the Microsoft Store. The upgrade should have taken place automatically, but if you don’t enable automatic updates on your PC, follow these steps:

If you only need Netflix to work again quickly, the Apps & Features tool is your best option. Several consumers who followed the procedures below and restarted their computers were able to use the Netflix app without receiving the U7353 error code after doing so.

When you’re in a bind, sometimes all you need is a quick remedy. Users should restart their app on the first try.

In case you still get the error, you can try the next fix.

Some customers have claimed that the problem was resolved after they deleted the Netflix app and reinstalled it from the Microsoft Store.

Several users who have utilized this technique have reported, however, that for them the cure was only temporary since the bug reappeared shortly after.

You should know that, while Netflix works on fixing its UWP app, you may need to repeat this procedure from time to time. Here is what you must do:

Because of this problem, some users have been unable to access certain websites. This issue commonly occurs when using the default DNS settings. Several clients who were affected stated that the problem was resolved after changing their DNS addresses to Google’s DNS and flushing the DNS cache.

What Are The Causes Of the Netflix Error U7353?

We researched this problem by looking at many user reports and the repair procedures that are most commonly used to fix it on Windows computers.

This error code indicates some incorrect or missing information on the computer that has to be updated for the Netflix client to validate the account.

There are a number of reasons why this error code might be displayed:

If you’re having trouble resolving this Netflix code or fixing the Error Code U7353 issue, this article will walk you through several troubleshooting steps.

We have mentioned some methods that other users in a similar position have used to repair the problem and return to normal Netflix functionality.

If you want to keep operating at peak efficiency, we recommend beginning with the most efficient and simplest procedures, which are presented in ascending order since they are related to one another.

Regardless of what causes your problem, one of the techniques is almost certainly going to fix it.

Netflix error code U7353 is a common problem for Windows 10 users. Fortunately, there are several ways to fix this issue and get back to watching Netflix in no time at all!

In the event that you’ve already tried restarting your computer or resetting your app with little success, try one of the methods mentioned in this article.

After solving Netflix Error Code U7353, you can enjoy Netflix content and never miss an episode of Naruto Shippuden on Netflix again.

Hope you will fix the issues by following the above-given methods.