Unlike other streaming services like YouTube TV Canada, Netflix doesn’t provide data estimates for its 4K HDR content, even though it does state that streaming 4K consumes about 7GB per hour.

When it comes to 4K HDR content, however, Netflix recommends a connection speed of 25mbps.

That isn’t any different from what Netflix says about standard UHD; therefore, we don’t believe there is a significant difference between HDR and non-HDR material when you hit the 4K barrier.

How To Limit Netflix Data Usage

Of course, for those on a restricted data plan, 7GB per hour of 4K Ultra HD video might be prohibitively costly or pointless.

That’s why Netflix and American Netflix have incorporated some clever elements into its Android and iOS apps that allow you to restrict how much data they use.

You won’t be able to create a specific data limit in the app but only four basic alternatives are enough for you and that is: Automatic, Maximum Data, Save Data, and Wi-Fi Only.

Here’s the short definition of each option:

Here are the steps to do changes to these features:

Adjust Playback To Control Data Use 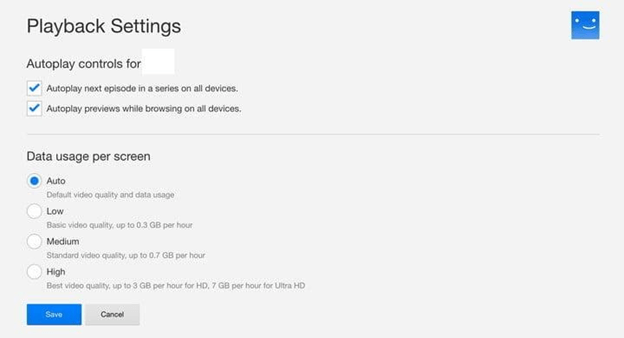 If you have a shared Netflix subscription, it’s possible that friends or family may be streaming the service on numerous devices.

There almost always is at least one person who uses more data than everyone else. As a result, Netflix offers users the choice of restricting data usage per viewer.

You may also set an hourly limit if everyone has the same data allowance. Everyone else on the plan will benefit from having less arguing about who gets to view what and when they can stream Netflix since it will improve overall service operation for all users.

Here’s a look at the different data usage options:

You can follow the below steps to set a profile-specific playback option:

Streaming With A Mobile Hotspot

A wireless hotspot is a tiny router that turns your data connection on a smartphone or other mobile device into a Wi-Fi connection that other nearby devices can connect to, much like a small router.

People who have hotspots may be interested to know whether streaming Netflix through the hotspot’s wireless connection uses less data since Wi-Fi connections are frequently linked with saving money on cell plans.

Even though a hotspot requires no additional equipment, it still relies on your phone’s data plan.

Making a Wi-Fi signal from the data consumed by your phone is less efficient than making use of your data plan straight, so this method uses more data than Netflix does.

The one exception is if you have an alternate data plan that gives extra data just for hotspots, but such plans are uncommon.

There are a few methods to reduce your Netflix data usage on your computer, phone, and, in some cases, your TV. The options are all easy to understand.

Another alternative we won’t discuss below is not signing up for Netflix’s UHD plan. You’re limited to 1080p automatically, but you lose simultaneous streams, so it’s not a good choice for families.

The problem with this one is that it’s a little bit complicated. Android TV, Roku, Fire TV, and Apple TV all have resolution limitations that prevent 4K video from loading.

The extra data use from 4K and HDR may be cut out by restricting resolution to 1080p on Roku, Apple TV, Android TV, and Fire TV settings.

On smart TVs, the Netflix app generally has its own page. Although there were no resolution options on my LG B7, it may be available on other sets.

Other than Netflix you can also watch many other streaming services in Canada on TVs such as Sling TV, Hulu, and Disney+ Hotstar Canada.

Can I Stream Netflix With 3G Wireless?

Expect 3G speeds to be between 1Mbps and 14 Mbps, with at least 2Mbps required to view in low-definition on Netflix.

Does Netflix Use Different Data For Different Countries’ Libraries?

Netflix’s data usage does not seem to be significantly different when streaming content from different countries’ libraries.

For example, a recent study found that Netflix’s data usage was about the same whether streaming content from the American Netflix library or the Canadian Netflix library. However, this may vary depending on the specific content that is being streamed.

Does Disney plus use more data than Netflix?

Without a comparable compression algorithm, the files streaming on Disney+ put a larger strain on your network by using up more bandwidth than a similar file on Netflix would. Because of this, Disney+ is buffering more frequently for some users.

Streaming Netflix on a mobile hotspot will use more data than streaming it from your phone.

If you’re looking to save some money, set the video quality for automatic and then check back in 24 hours or so to see if that works as well as watch the next episode automatically.

On your computer, select low-quality playback settings and make sure to keep an eye out for changes over time. And don’t forget about smart TVs!

They may have their own page where you can change resolution and other options like auto-play of episodes (which is great when binge-watching).

If you have difficulty finding the content on your smart tv, do not panic as Netflix’s library varies on your region, so you can change Netflix region easily with the help of a VPN.