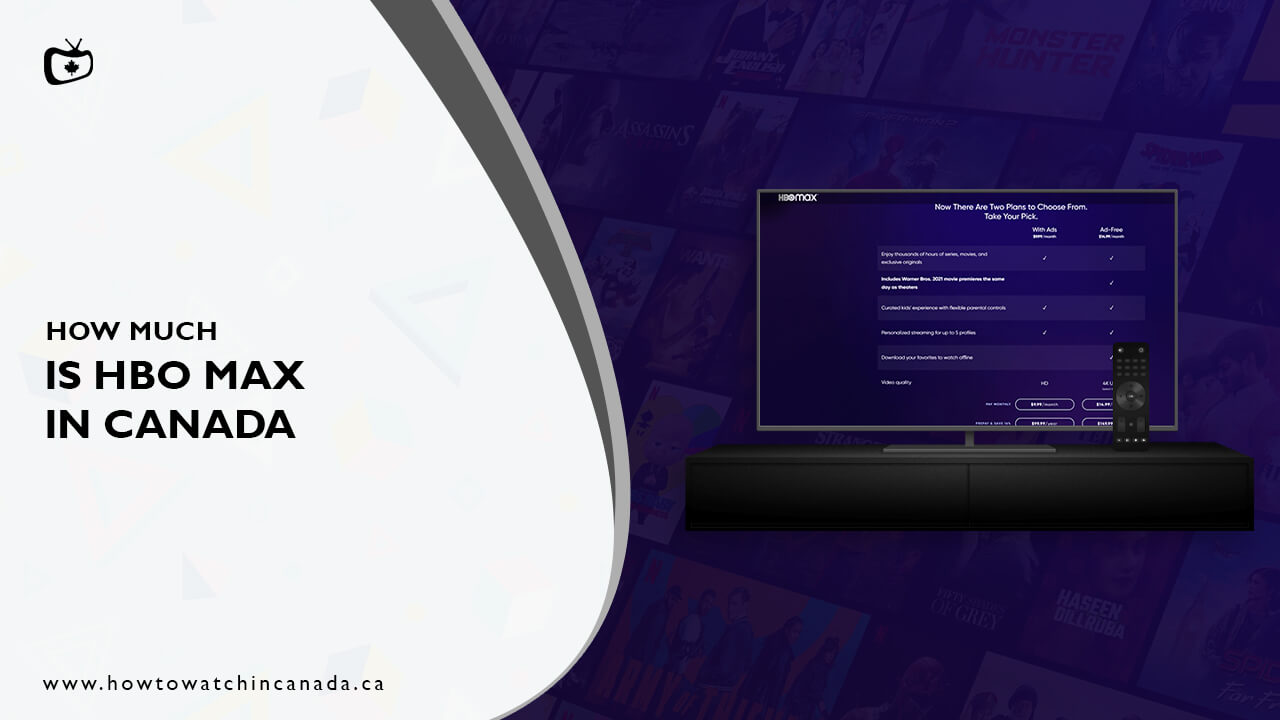 Many people are wondering how much is HBO Max cost in Canada.

HBO Max is a popular streaming service and has not yet officially launched in Canada, but you can access HBO Max in Canada by using a VPN. However, the price is still unknown to many people.

In this post, we will take a look at how much is HBO Max cost and what you can expect from the service.

The HBO Max Prices in Canada are CAD 19.35/month without ads and CAD 12.90/month with ads. With ad-free viewing, you can also catch new Warner Bros. features the same day they premiere in theaters.

How Much Is HBO Max Cost In Canada: [Quick Guide]

Following are the two different plans for HBO Max:

You might want to get the Ads-Free plan because you will not see commercials and ads which can be annoying sometimes!

You can create up to five individual user profiles with either plan. HBO Max now allows you to watch simultaneously on up to three devices at once.

The ‘Ads-Free’ plan allows you to download a maximum of 30 titles. The downloads expire after 30 days, or 48 hours once you’ve started watching.

HBO Max ended its one-week free trial in December 2020, just before releasing Wonder Woman 1984 to stream on the service the same day it opened in theaters.

However, HBO Max is accessible to most regular HBO subscribers for no additional cost, and it does occasionally conduct offers and bundling deals.

What Are The Offers & Deals From HBO Max in Canada?

HBO Max is now available for free to current HBO subscribers. Customers who subscribe to HBO through Comcast, Charter, or an AT&T bundle (DirecTV, IPTV, or AT&T TV), they will get HBO Max automatically. Anyone who enrolls in a Hulu add-on for HBO gets it for free as well.

HBO Max has recently added new partners, so existing HBO subscribers may get HBO Max for free as well. Altice, Verizon, Cox Communications, NCTC, Xbox, and Playstation 4 are among the newest partners.

Beginning in Fall 2021, HBO Max will no longer be accessible as an add-on through Amazon Prime Video. For the HBO Max add-on, you’ll be charged CAD 19.09 per month after your free trial has ended.

What Happened To Same-Day Movies on HBO Max?

When HBO Max announced it would offer all of Warner Bros’ new, theatrically released films in 2021 exclusively on HBO Max at no additional cost, it made waves.

That included Wonder Woman 1984, Dune, and Godzilla vs. Kong, to name a few. All of those movies have now completed their initial same-day streaming runs.

However, they returned to HBO Max quickly: about five months after their theatrical debuts on Max and elsewhere. There are a number of movies that have already been added, removed, or returned.

How Much Is HBO Max Cost In Canada: FAQs

How does the HBO Max price compare to Netflix?

Over the last decade, Netflix’s pricing hikes have become common, but the most recent one makes the company’s standard plan, which costs CAD 16.49 in Canada, more expensive than HBO Max’s regular rate of CAD 12.90.

How does the HBO Max price compare to Amazon Prime Video?

Amazon Prime Video, on the other hand, absolutely blows HBO Max out of the water. It’s cheaper than an ‘Ad-Free’ HBO Max account that comes in CAD 19.35 a month and with benefits like music streaming and free delivery, as part of a CAD 7.99 Amazon Prime membership, which has a staggering overall collection of over 20,000 TV series and films.

How does the HBO Max price compare to Disney Plus?

How does the HBO Max cost compare to Hulu?

The cost of HBO Max in Canada is more than the cost of Hulu in Canada, with the base package costing CAD 12.90 per month rather than Hulu’s CAD 11.99 per month. HBO Max limits its plan choices to the ad-free tier at CAD 19.35 per month, whereas Hulu offers a wide range of extra tags for an existing plan.

Is HBO Max worth it?

Yes, HBO Max is worth it because you get a lot of content for your money. Plus you will get movies from Warner Bros, originals, and exclusive content for the same price that you can’t find anywhere else.

You may be wondering how much is HBO Max cost in Canada. The standard package of the service costs CAD 19.35 per month in Canada, which is more expensive than Hulu’s cheapest plan at CAD 11.99 a month or Disney Plus’ starting price of CAD 119.9 for an annual subscription that includes all content on their platform.

I hope you will find this information helpful as you consider subscribing and watching HBO Max in Canada.